As a long time shell user I’ve spent a lot of time using bash as my default shell. In most of the hosting environments I regularly use bash is the default shell. Because of this bash is what I’ve been using on my local development machine until I recently switched to Zsh and oh-my-zsh. This post outlines why I prefer Zsh and how I made the switch. 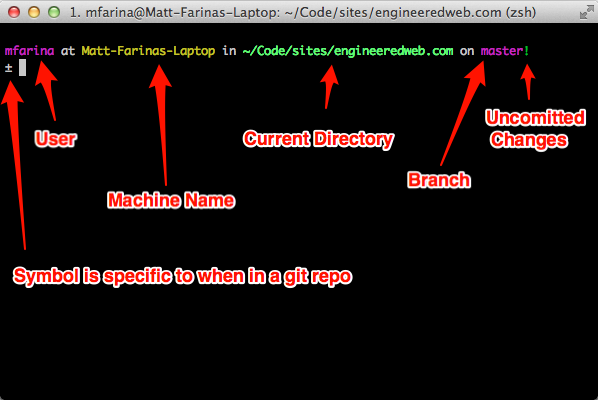 Why I Prefer Zsh

There are a few reasons that Zsh has really popped for me.

My development systems are Macs. The default terminal shipped with the operating system is nothing special. Instead of using the default terminal I use iTerm2. iTerm2 has tabs, multiple panes, and you can even configure it to operate like visor.

Zsh is already installed on most modern operating systems and is already on OS X. Installing oh-my-zsh and setting zsh as the default shell is a simple one line install script in the readme documentationn.

Out of the box it won’t look like the image of the shell above. I’ve switched themes from the default one.

The first step I did was to migrate my current bash customizations from my .bashrc and .bash_profile files to the new .zshrc file in my home directory.

The next step is to customize to your liking. First, there are a number of plugins, some of which are documented on the wiki. Plugins are enabled in the .zshrc.

To make the display look the way you want you can choose or create a theme. A number of the themes that come with oh-my-zsh are pictured on the theme wiki. The one pictured above is the dstufft theme.

In getting started I read a number of useful posts. Here are some I found useful.