Without a doubt Internet Explorer is the most popular browser. When this conversation comes up I am regularly sent a link to the W3Schools browser statistics which show Firefox in the lead for users who use their site. This would be fine if the users of their site were a good sampling. As they themselves note in the footer, this isn't the case. 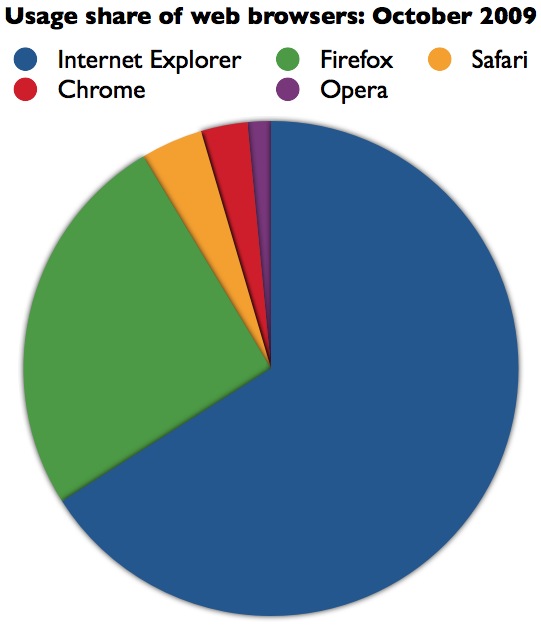 On Wikipedia the page Usage share of web browsers provides a better picture. As of October 2009 the mean and median usage of Internet Explorer is about 65%. That means it has about a 2/3 market share.

This number is not the worst of them all. Internet Explorer has 3 major version still being used in the wild. While most home users who can use the newest release are, many users working on business computers are still forced to use older releases. According to the stats on Wikipedia IE6 has a 23.35% usage, IE7 has an 18.21% usage, and IE8 has a 20.48% usage (as of October 2009).

Sadly, this still means there are almost as many IE6 users as there are Firefox users.

Who Are We Building For?

When it comes to open source software one of the common phrases throw around is to "scratch your own itch". When we have an itch to scratch we need to ask who are we building for? If a product is being created for mass consumption and the user experience of someone using Internet Explorer is less than desired this will have an impact on the success of the product. Maybe a better way to ask this question is to ask, am I creating this for myself and people like me or for others? If we are building something for others, we have to ask who those others are and know what browsers they are using.

If a site is being built for mass consumption, like a newspaper site, browsers like IE6 have to be taken into account and treated as first class citizens for user experience. Yet, many products and projects aren't targeted at everyone. There are many niche markets where the target is a group using the latest releases of modern browsers. For example, this site is targeted at people who build websites and web applications. Those users are typically on the cutting edge of browser technology. This is a bright spot and provides some good news for some niches.

A second bright spot is where Internet Explorer is going in the future. With newer versions of Windows in use that use the newer releases of Internet Explorer we will see the usage of the older versions going away in the future. And, IE9 is starting to embrace some of the modern trends and power. Its JavaScript engine is already much faster and it already supports CSS rounded corners.