Now that 2017 is behind us I wanted to take a look at how things went for Helm and the community charts in 2017. When starting a new year I like to look back at the past year to see how things have gone. And, since these projects fall under Kubernetes SIG Apps they are of interest to me.

One way to look at Helm is to look at publicly available statistics and information. With that we can attempt to analyze the data to see what it means.

As of today, Helm has 249 contributors. That’s more than other CNCF projects like prometheus, fluentd, linkerd, or jaeger. This is 11 more contributors than when I gave the SIG Apps update at KubeCon in December, just a month ago. If we look at Helm in early 2017 on March 3rd (which you can view in the wayback machine) you’ll see that there were 113 contributors. In approximately 10 months time the Helm project added 136 contributors to more than double the total number of contributors.

Where those contributors have come from is also worth looking at. Doing a little legwork to track down contributor profiles, there have been contributions from people who work at Microsoft, Google, Samsung SDS, Bitnami, CoreOS, Adobe, Hootsuite, Intel, Suse, NBC Universal, SAP, HPE, Mirantis, Alibaba, Nokia, IBM, and others.

Musing: A Different Type Of Contribution

This begs the question, why did Helm have so many more contributors while having so many fewer commits? There are two reasons that come to mind:

It will be interesting to see how contributions change in 2018 with plans to work on Helm 3 where APIs can change. While making breaking changes is useful, especially with all the change that’s happened in Kubernetes, it’s important to acknowledge how important stability is for anyone who wants to run production workloads.

We can get some representative information from external sources.

Homebrew, the macOS package manger, provides statistics for package downloads going back a certain period. It’s important to note that Helm runs on Windows and Linux along with there being multiple download methods for Mac.

With that in mind, between April 16, 2017 and December 31, 2017 there were over 48,800 installations for Helm. And, that number grew over time with newer versions which shows usage growth even as people upgrade versions.

Note, this is just representative. We do hope to have better statistics in the future.

The community charts are a place to share common charts (Helms version of packages) that try to use best practices. People and companies are encouraged to have their own charts and chart repositories. But, a shared set is available for the community as well. This has been a good place for projects like Datadog to share their installation into a Kubernetes cluster. 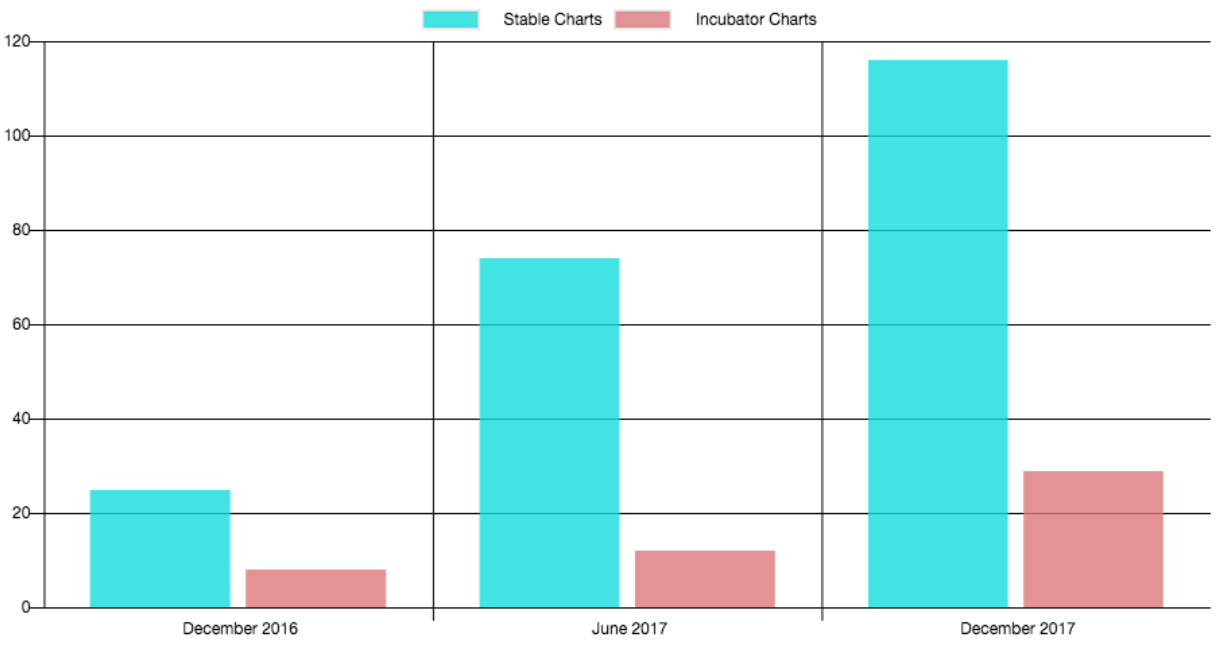 The total number of community charts grew quite a bit over the year:

There are over 4.5 times as many charts in December 2017 as there were in December 2016. That’s good growth that highlights people are using the community charts to share and collaborate.

A subtle thing you’ll find in the data is that chart contributions started to plateau as 2017 went on. While individual charts had maintainers who owned and drove their development, changes could only be merged by a much smaller group of people who maintained the charts repository. That small group of people wasn’t scaling.

To improve the situation the charts maintainers implemented two things:

The idea here was to put best practices into CI along with better testing. Then enable more chart owners to merge changes themselves. Automate and spread the load.

With many package managers you are able to get download statistics. It turns out that’s hard for charts. Not because we aren’t capturing the data but due to the quality of the data we capture.

To combat this problem, and improve the quality of the data, we are working to introduce user agent strings into the clients. Once we have better data we hope to share more of it.

I do want to give a hat tip to Vic Iglesias for his work in this space.

Or rather, my conclusions: