Why does OpenStack matter? When I talk with cloud app developers I regularly hear that it doesn’t. The cloud conversations center on AWS, Google, Azure, or a platform as a service like Heroku or one based on Docker.

Yet, if you look at current trends you’d see something like: 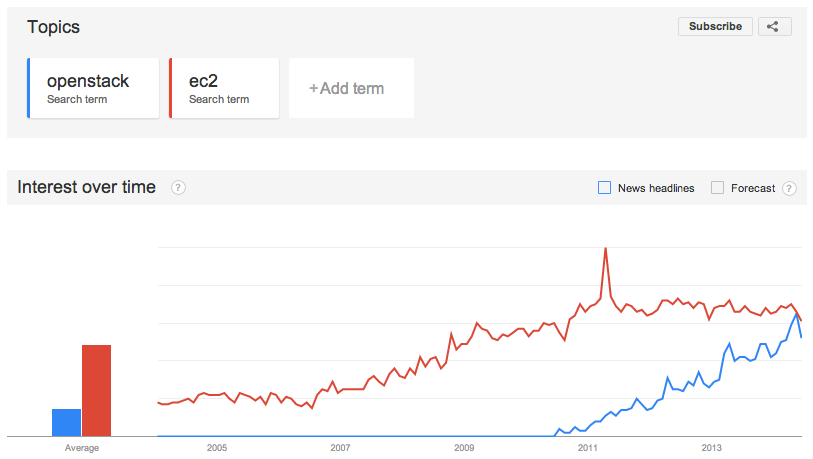 Or, if you follow the OpenStack community you might see that the US Summit, which happens once per year, went from about 1,800 attendees a year ago to about 4,500 attendees this past May. That’s quite a bit of growth year over year.

I don’t consider these reasons that OpenStack matters. Rather it matters and these are signs it’s worth looking a little deeper into.

When thinking of OpenStack it’s important to put it into perspective compared to the known players like AWS. OpenStack is a platform to build a cloud. Companies like HP can use it to build a product for others or stand up a public cloud. Some others can use it to stand up their own private cloud like Comcast did.

OpenStack is also a community of developers that anyone can join. There are major players pouring piles of money into the project and products in the ecosystem in an effort to make them and it successful.

A regular concern with cloud companies like AWS, Google, or Azure is vendor lock-in. If I’m being honest, I know companies who’ve wanted to move from one cloud to another but built their application or tooling to be so tightly coupled to a cloud provider they couldn’t cost effectively move. This is not uncommon.

With OpenStack the API that works for one provider for a given service works for another provider for that service. Some providers add in their own services or extras but those are generally opt-in features.

Right now there are multiple public cloud providers built using OpenStack. There are more coming that are not listed there. Want to move from one to another? Want to host in two different cloud providers? Want one that’s not a US company?

Given all the Snowden revelations there are some who want non-US companies holding their cloud data. Some who want to build their own cloud.

If you’re going to build a cloud right now you’re doing it with OpenStack. That may be by directly standing it up or by using one of the products that help you with that.

Did you know there are boxes you can plug into a rack of servers and it will stand up OpenStack?

It’s worth taking a moment to talk about why public clouds don’t work for everyone. I’ll give two of the many reasons.

If you’re building a private cloud OpenStack has become the top option.

Sometimes you build something in a private cloud and want to move all of it or part of it to a public cloud. If you have the same APIs than the same tooling can be used for both the private and public clouds. The applications can run in both clouds.

These are just a few of the reasons OpenStack matters. The landscape is changing and it’s worth paying attention to.